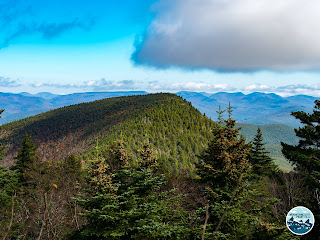 Amber and I ended up at the Cat’s Tail Trail Marathon in the same way many questionable ideas often start: a couple hours of Googling. I searched a number of online race databases for races in the Northeast in the fall that we could link into a trip to see family in Western New York. A couple caught my fancy, but the Cat’s Tail’s 7,000 ft of vertical gain and rugged, technical trails sounded too good to pass up. 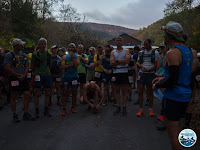 The race delivered on all fronts; it was beautiful, the trails were some of the most technical I’ve ever run in a race, and there was definitely vert. The RDs, Mike and Charlie were awesome and very supportive, and put on a proper, old-school-feel mountain run. The towns in the area are quaint and have a long history (we stayed in the 205 yr old Colonial Inn in Pine Hill, NY, about 15 min from the race start).

Previous two-time winner and course record holder Ben Nephews ran away with the win again in 4:33:51, and first-timer Aaron Stredny took second in 4:38:21. I came
in third in 4:43:37, and Amber took 3rd lady (finishing in 5:56:25 for likely the most impressive race of the day, running basically off the couch with very little training, and she would be the first to say that she is no lover of technical, rocky running). I had hoped to be in contention for the win and maybe the course record, but essentially made a couple errors that put me too far out of touch with the leaders. Despite having better weather than previous two rainy years (and a potential $200 cash prize), the course record stayed intact, maybe due to warmer temps on the back end of the course.

The race started in waves, and I was in the first wave with the other dudes who hoped to compete. Ben and Aaron went off the front on the first climb, and it felt like the pace was a little too hot so I held back a little bit and fell into a nice place, no man’s land, behind the two leaders but ahead of the rest of the chase pack, where I was able to go my own pace. 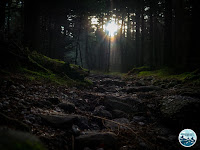 The top of the first big climb led into a long, rolling traverse along a ridge of somewhat smooth running interspersed with varied technical sections. A lot of fresh leaf fall upped the ante a lot, hiding softball-sized rocks and slickening bigger, off-camber rock slabs. These slowed me down a bit, not wanting to break any bones, but I ran the runnable stuff well. By the mile 9.5 aid station the volunteers said I was 2-3 minutes back of the leaders and I felt great after really cruising the ridge and descent. I stopped just long enough to refill a bottle with water and drink some coca cola. 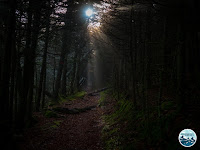 The next climb up Slide Mountain can’t be described as anything less than mystical. Toward the top, a heavy mist was the perfect medium for sunlight to illuminate the stunted hemlock forest with perfect little rays of light. Unfortunately, between prancing in wonder, and deciding to take time hiking to eat more on the climb, I simply ran this section too slowly. ***EDIT: Looking at the Strava flybys, it looks like I actually lost most of my time on the downhill sections interspersed with scrambling. Those guys really cruised that section, and maybe it speaks partly to advantage of familiarity with the terrain (both are somewhat local to the area).

I ran out of the mist as I began descending Slide Mountain, and the next few miles of trail were by far the most fun and unique of the course with multiple technical scrambles up and down big rock slabs. Most of them were only 2 or 3 movements, but you were definitely using your hands and/or butt-scooting along. It was super fun, and definitely challenging to keep in a good running rhythm. 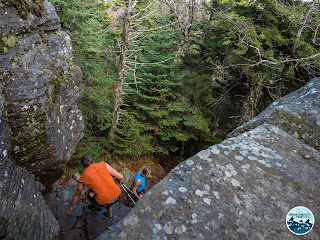 By the reports of random hikers and the next aid station around 16.5 mi, I was around 10 minutes back from the leaders. I realized then that it was likely too much of a gap to make up unless their wheels really came off, but I tried to do it anyway. The next 2 miles or so were really hard to follow the trail due to heavy fresh leaf fall, and apparently some of the flagging had gotten pulled down, leading to frequent stops to search for the trail or the next flag. The final 6 or 7 miles were more runnable than the middle section, but not nearly the easy, all downhill cruise I was picturing from the course profile and map. It was pretty rolling, and the leaves continued to hide those potentially-race-ending-ankle-break rocks, slowing the pace from the all-out rip down the mountain to maybe a somewhat-reckless pace.

The course finishes with about a mile on paved roads that I cruised in around 5:45/mi pace to cheers and high fives at the finish line. I was definitely worked, but I still had some gas in the tank. I think that I just didn’t keep the intensity and focus I needed for a “shorter” race. My last two focal races were a 100 miler and a 50 miler, so I think I just didn’t go hard enough- I was running ultra-pace (or ultra-effort, anyway) at a marathon. It was also complicated by being much closer to sea level than my normal runs, so I think my perceived-effort-to-pace ratio was a little out of whack. But no excuses, it was a great learning experience and a phenomenally fun run, and Ben and Aaron ran a great race. I’m stoked to have finished 3rd, and I would love to go back and run it again.

A huge thanks again to the RDs and wonderful volunteers, and thanks to you for reading along!

All photos above by Mountain Peak Fitness, Joe and Elizabeth Azzie