Autumn in the Wind River Range

Fall in the mountains is one of my favorite times. Leaves changing, the rusty oranges and reds of
alpine vegetation, and a fresh dusting of snow on the high peaks; it's simple the best.

I got out for a jaunt in the Winds in the last week of September. This time of year you could have sun and 70s or snow and 20s. I lucked out with something closer to the former.

My objective was Temple Pass and one or a few of the surrounding higher peaks. I started from the
Block and Tackle Hill trailhead, which I believe is the closest to Little Sandy lake (shortest to Temple Pass). It's a rough drive in, and without 4wd and high clearance, you're likely to get stuck at the bottom of the namesake Block and Tackle Hill and tack 3 miles or so each way onto your trip. It's a phenomenal spot though, and the trail starts off following the Little Sandy River. 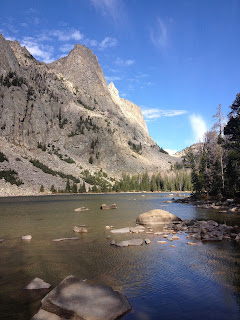 It's about three miles of rolling singletrack from the trailhead to Little Sandy Lake, winding through meadows, forests, and past a couple small lakes, with one river crossing (there was a log and rope that created a dry crossing). There is a trail that traverses the lake higher, going up and over several granite abutments, but the lake was low enough that I was able to just rock hop along the lake shore to get to the northern end of it.

It was then an additional six miles up the Little Sandy drainage to the top of Temple Pass. The valley above Little Sandy Lake is nothing short of spectacular. The trail is mostly very runnable, and is easy to follow until the uppermost basin below the pass, but at that point your objective is quite clear.

I ended up climbing Temple Peak from the pass. I'd read in Joe Kelsey's Climbing and Hiking in the Wind River Mountains that there was a class III and class IV couloir on the east face, and sure enough, there was. Fancy that. I opted for the class III couloir to ascend, which turned a little sketchy with the fresh now and loose dirt in its uppermost portion. It puts you out on Temple's south ridge, and from there it's an easy, fun scramble to the top. The views speak for themselves, and the summit block is essentially overhanging a 1500 ft north face of Temple above the Temple Glacier

(sidenote: Kelsey's book stated that the someone had logged climbing the eastern thumb of Temple Glacier to then traverse and ascend the 4th class couloir on the eastern face. I traversed around from the couloir to get a view of the glacier on my descent, only to find a diminutive, dirty patch of ice and snow at the base of Temple's north face. Tell me climate change isn't happening, and I'll smack you upside the head. With my crampons).

For the descent I opted to try the class IV couloir- the snowiest parts looked a bit more secure, and it's steepest section appeared to be a bit drier. Those assessments were correct, though the steepest section would probably be more accurately rated as low 5th class. The moves were all secure with nice ledges, but it felt a little bit more like climbing than scrambling.

After that, repeat in reverse for an amazing 20ish mile day in the mountains. Too much fun!