What the heck are Energybits?! I had heard them mentioned in a podcast once before, but I didn’t  look into them further until they started showing up in my Twitter feed. Curious, I checked out their website and product, and followed them on Twitter (@energybits). They are little bits, pill-like in size and form, of concentrated, dried Spirulina algae, a dense source of B vitamins and many vital nutrients.

Shortly after following them, I got a personal message expressing genuine interest in my athletic goals and training. A few exchanges later, and they offered to send me a free sample of Energybits. Now that is a progressive company! And shows a lot of confidence in the fact that their product will sell itself.

Anyway, they showed up in the mail a few days later, and came in this nifty little tin! 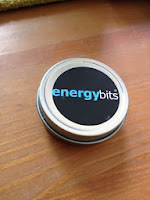 The sample was two servings, or 60 “bits” total. I opted to save them for a couple harder workout days. The first day I took them I did a 1.5hr hard, windy bike ride, followed an hour later by an hour long run. I ate the bits between the two, and though I can’t say that I was overtaken by a miraculous surge of energy and power, I had good, sustained energy and focus through the run, things that can be difficult to find when you start running already tired.

The other serving I saved for a couple days later. I opted to do a fasted run first thing in the morning, eating only the 30 remaining  Energybits before starting an out and back, 8 mi run with 2200 feet of climbing (starting at an elevation of 6,000f ft and peaking at 7,400 ft). The bits are oddly filling (perhaps they expand in the stomach), and I opted to swallow about half of them and chew the other half. I get excited about green foods, and felt like a little kid when I looked in the mirror and giggled because chewing the bits gives you spectacularly green saliva. It washed down quickly with some water though ;) Anyway, I felt good through the run, again with a good level of sustained energy and focus.

Overall, I’m pretty stoked about these weird little green bits. I’ll just say that they will be a new addition to my training and racing toolbox. Thanks, Energybits! Check them out at http://www.energybits.com/

As a side note, I’ve landed in Lander, WY. It seems like a great town, and a pretty cool location for getting out on the trails- situated in rolling foothills at about 5,000 feet of elevation, with high plains and desert to the east, and the Wind River mountain range to the west. My move here also landed me with two new running partners, Amber and her kitty Liam! Pretty awesome. 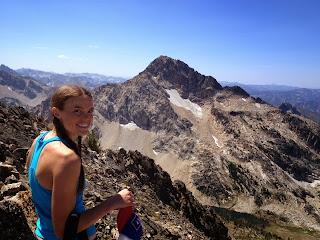 I'm also pretty excited to start working part-time for Elemental Performance and Fitness in Lander. The staff and owners seem great, and the facilities will be huge for staying fit and strong through the winter.