Tutorial: How to do Yosemite in a Day

So I thought I'd try my hand at writing one of those new-fangled Internet tutorials. This post could also be aptly titled, "How NOT to do Yosemite in a day", or "How to Create Life-Long Memories of Suffering in Yosemite National Park in Just One Day!"

Anyway, on with the tutorial! 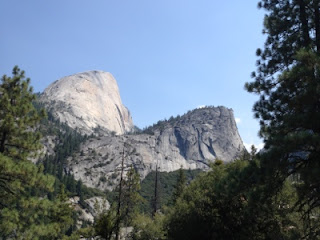 Step One: Drive to Yosemite National Park
-Make sure you greatly underestimate the size of Yosemite and the amount of time it will take to drive to, through, and around it.

Step Two: Drop your bicycle off at Tuolumne Meadows
-Lock it to a tree in the parking lot of the small general store. Don't forget to leave your helmet and riding gloves with the bike!

Step Three: Drive down to Yosemite Valley
-Ignore how hilly the drive seems as you drive "down" to the valley
-Gawk unabashedly at the enormous, sheer granite walls as you drive into the valley proper
-Go ahead, be the stereotypical tourist. You NEED those photos.
-Park your car at the day use lot (and hope that your car doesn't end up being there overnight...)
-Again, don't forget to greatly underestimate the amount of time it will take to get to the parking lot.

Step Four: Pack frantically from the back of your car/truck for a long day of exertion
-Don't forget to forget your headlamp, because safety is overrated anyway
-General rule of thumb: pack more calories than you think you need

Step Five: Get to the John Muir Trail trailhead
-Not quite as easy as you'd hope
-You'll probably end up taking shuttle buses, and realize you could have walked there faster if there had been any obvious pedestrian pathway from the parking lot to the trailhead

Step Six: Start running (and hiking)
-Start out a little too fast to make up for your way-too-late start because you really underestimated travel time through the park
-Smile and chat with foreigners when stuck behind massive crowds of people
-Realize that 6,000+ feet of vertical climbing IS indeed, a lot of vertical
-Run out of water
-Realize you forgot your headlamp, and your water purification/iodine tablets, when you run out of water and realize you're moving more slowly than you anticipated
-Just drink from the creek. You won't get sick for at least another day or two, or maybe not at all!
-Drink from that next creek too, because who knows if you'll ever see water again
-Notice that "planning" isn't in the list before now? That's because it was part of the plan to not plan too much, it just takes extra time anyway, and it's more of an adventure this way!
-Remember that 20-25 miles of trail running is, in fact, a lot of miles
-Arrive at your bicycle in Tuolumne Meadows some 6 hours later, feeling a touch haggard.

Step Seven: Raid the general store
-Buy impulsively any food that still sounds mildly appetizing
-Do so quickly, because you have at least a 3 hour bike ride, and there is only 3.5 hours of daylight remaining

Step Eight: Don your helmet and ride on, fearless road warrior!
-Ignore that pit in your stomach that twists when you start to remember the "hillyness" of the road back to the valley
-Curse loudly and shake your fist at passing cars that nearly hit you, and think terrible thoughts for those who yell durogatory remarks out their windows at you
-Curse the man who routed this road, for he surely made that hill to spite you and crush your spirit.
-As you bite into that fresh, juicy peach you bought from the general store, raise your hands high into the air and yell, "YAAAAAAAAAAAA"! like this guy
-Realize that you're just not going to make it before dark
-Enjoy the sunset as you finally coast at high speed down into Yosemite Valley
-Place your last vestiges of hope in humanity that the people driving up behind you in the dark are not texting on their phones, and that they will in fact go around you rather than run you over.

Step Nine: Arrive back at your vehicle
-If the "you" from this morning was smart, there is a cooler waiting with refreshing beverages in the back seat.
-Get publicly naked with a nonchalance that comes only from sweating and pedaling in running shorts for much, much too long. It also helps that it got dark half an hour ago.
-Drive out of the National Park to find someplace to park your car for the night where you won't get heavily fined


Step Ten: Go and be a real tourist the next day
-Because you covered so much ground yesterday, you still have all of Sunday to gawk!
-Also, make sure you go swim in a river or lake, because you definitely smell, and look, downright disgusting

That concludes this tutorial, hope you found it useful!